A bringer of surprises

I met Mike Belleville in my first support group for people in the early-stage of early-onset Alzheimer’s in the fall of 2015, a few months after my diagnosis. This was at a time when I was still early in the learning curve of Alzheimer’s. But within a couple of months, I learned that Mike didn’t have Alzheimer’s after all. Instead, his diagnosis was Lewy bodies disease, a much-less common diagnosis, and one in which the symptoms can manifest themselves in wide number of ways.
But to hear Mike speak, you would never guess that he had anything wrong with his brain at all. The former Verizon senior technician still speaks extremely fluently and calmly. This talent was made manifest during last year’s national Alzheimer’s Association in Washington, during which Mike was invited, on very short notice—a matter of minutes—to be interviewed in front of a huge crowd at the convention center, courtesy of the jumbotron. But Mike seemed as relaxed as if he were back home in his den in Douglas, Massachusetts, in his Lazy Boy recliner.
As a senior Verizon technician, where he worked for nineteen and one-half-years, he had a deep well of knowledge of the complicated field of public-sector telecommunications. But that was before things started going south. It got so bad that the people Mike had trained had to explain his task to Mike himself. Later, in an interview in Men’s Health magazine article, Mike noted that after a marital spat with his wife, Cheryl, he recollected none of the events the night before.
What I learned most from Mike about Lewy bodies is that conventional Alzheimer’s disease brings fewer surprises than Lewy bodies disease does. That’s not to say that Alzheimer’s is a one-fit-all disease. On the contrary, no two persons with Alzheimer’s have the same set of symptoms. But it seems clear that Lewy bodies is a good deal more unpredictable in its manifestations. (One blogger with the disorder christened his blog “The Lewy Body Roller Coaster.”)
As Mike explained, there are three or four different disorders connected with Lewy bodies. Symptoms of Parkinson’s (not the disease itself) is perhaps the best known sub-category of the group.  According to Mike, sleep disorders are common with Lewy bodies. And with Ramsey disorder, another illness in this category, “You get a message to your brain. And what is happening is that I’m not getting that signal.” Mike made clear that the disorder is far more than just sleep apnea. “Normal people go into REM sleep. I’ve ended up on the floor and knocked over a lamp. I’ve walked into a wall. It’s not a fun thing, obviously.”
Early in our conversation, I asked Mike if he would have preferred to have his original diagnosis, early-0nset Alzheimer’s. At first Mike was circumspect on the topic, but the more he filled me in the details of his symptoms of Lewy bodies, the more I felt that Lewy bodies was the more challenging diagnosis. And there is one caveat that Mike must follow under any condition: be prescribed an antipsychotic drug. The consequences would be dire. And, after our phone interview, I came away with renewed admiration for my cohort and friend, for his cheerful stoicism in the face of a disease no one wants.
Posted by Mitch Evich at 6:23 AM No comments:

How similar are Alzheimer’s and Parkinson’s disease? When I did a search for the two diseases recently, the first result led me directly to the Alzheimer’s Association. Their website notes that Parkinson’s
disease begins in a part of the brain that governs the realm of movement. And, in December, Insightec, a startup bankrolled by Koch Industries, obtained $150 million in venture capital designed for both Alzheimer’s and Parkinson’s research.
And in the recent book “Seven Steps to Managing Your Memory: What’s Normal, What’s Not, and What to Do About It,” authors Andrew E. Budson and Maureen K. O’Connor note the difference between Parkinson’s and Lewy body dementia, another disorder which is sometimes mistaken for Alzheimer’s. The term “Parkinson’s disease dementia” is sometimes used for this condition, according to the authors.
One thing that Parkinson’s advocates have that people with Alzheimer’s don’t is a true celebrity advocate who is living with the disease—Michael J. Fox. Maria Shriver has spoken forcefully about her late father, Sargent Shriver, a key figure in the Kennedy and Johnson administrations, who died of Alzheimer’s. But her message would have been even more powerful if the person speaking was the one afflicted with Alzheimer’s.
In the fall of 2006, two weeks before the midterm elections, Fox emerged as a powerful advocate for stem-cell research to help people with Parkinson’s. After all, Fox was diagnosed with Parkinson’s at age 29—at least 20 years before early-onset Alzheimer’s typically begins. In an effective commercial shortly before the midterm elections, Fox, visibly shaking, stated that Jim Talent, the Republican candidate for the Senate in Missouri, wanted to “criminalize the science that gives us hope.” (That election would give the Democrats control of both the Senate and the House, and helped position Barack Obama as a viable candidate for president two years later.)
I’ve learned that after all these years, Fox is still doing fairly well. A photo taken about a month ago shows him playing a guitar at his annual fund-raising gala. According to one website, a reason that Fox continues to play guitar is that he is still living a somewhat normal existence. Parkinson’s “is not a nebulous cloud of doom that hangs over my head,” Fox stated. “It’s a set of challenges, and there are rewards in meeting those challenges.”
Fox was recently interviewed by Jane Pauley, and by the end of the session, Fox himself was in tears. “Because it reminded me how much they mean to me,” he said, referring to a 34-year-old mother of three he had met who had none of the advantages that Fox himself has, thanks to his wealth. “We don’t want anything ridiculous—we just want a cure,” Fox stated.
Sound familiar? 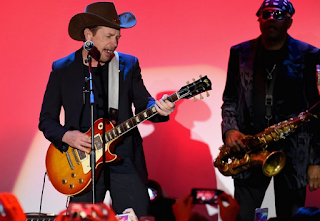 Posted by Mitch Evich at 8:05 AM No comments: