My intent this week was to write about insomnia, a subject I was intimate with in my twenties. My plan was to reflect on those nights, decades ago, when I would toss and turn in bed sometimes until dawn, waiting for my mind to wind down. The topic is of interest to me because, since I was diagnosed with Alzheimer’s in June, I’ve been wondering to what extent the disease is affecting my sleep. Rather than struggling to fall asleep at night, I find myself waking up earlier – sometimes much earlier – than I wish.
But that’s a topic for some other unwelcome dawn. Around 2 a.m. this past Tuesday, a couple of hours after I went to sleep, I woke up in a sweat. The disruption was forceful enough that falling back to sleep anytime soon seemed remote. Instead, I went downstairs to my dining room, where I located a notepad and began drafting this blogpost. This was not the first time that medication for Alzheimer’s has disrupted my peace. One of the first times I took a dose of Donepezil (better known by the brand name Aricept), I dreamt about Aaron Hernandez, the former New England Patriots star now serving a life sentence for murder. He was chasing me with what I believe was an axe.
That nightmare prompted me to read more carefully the seemingly endless menu of Donepezil’s potential side effects, ranging from nausea and vomiting to hallucinations. I suppose that I should count myself lucky in that the only effect I am experiencing regularly is some modest pain centered in my lowest vertabra, a consequence of an arthritic condition that dates back to my late thirties.
But I am still in the process of fully understanding Alzheimer’s as a disease. My earliest symptom appeared three years ago, after my wife and I dropped off our son at college in Washington, D.C. On the long drive back to Boston I noticed a thought forming in my head that I couldn’t quite grasp. It was as if I were trying to retrieve information from a hard drive manufactured in the early nineties. That machine would sometimes emit a grinding sound when calling forth a file. What I glimpsed was a phantom of a thought, empty of meaning.
It was another year before I realized that something was seriously wrong. Until then I could attribute a relatively modest decline in job performance to nothing more than burn-out after eight years in the same job. But in the late summer and early fall in 2013, my problems became more severe. That December my gerontologist (how many people in their early fifties are assigned to gerontologists?) noted that I was at risk of developing dementia.
The problem facing all of us in the early stage of early-onset Alzheimer’s is that there is no drug on the market that can substantially slow the disease’s progress. Pfizer, the maker of Aricept, makes clear on its website that the drug treats Alzheimer’s symptoms, such as poor short-term memory, rather than the underlying disease itself. A magic bullet it is not.
That could change, of course, just as things changed in the early 1990s for people who were HIV-positive, saving the lives of Magic Johnson and countless others. Do I think this sea change will come anytime soon? No.
But there is consolation in knowing that one’s disease tends to progress fairly slowly. There remains much time for me to observe the world. As I traverse the streets and walkways of Somerville, my home for most of the past thirty years, my gaze lingers on a small child squeezing a parent’s hand, a big dog on a leash dragging its owner, petunias blooming in a crack of the city sidewalk. 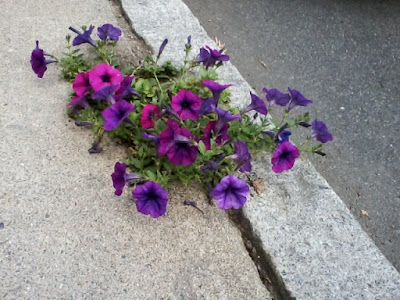