If you have early-stage Alzheimer’s and want to know what you can do that might forestall the disease’s progress, you’ll find plenty of information on the Internet. The challenge is sorting out the wheat from the chaff. It has become conventional wisdom that a “Mediterranean Diet”—featuring lots of seafood, yogurt, olive oil, nuts and grapes, along with leafy greens such as kale and spinach—is a good thing to follow. But it appears that Dr. Dale Bredesen, a neurologist at UCLA, has furnished evidence that certain dietary and lifestyle changes may not only slow down the pace of the disease but reverse it.
Early this week on the Today show, Bredesen spoke about his research, bringing encouraging news to a wide number of viewers. An abstract of the study, published two years ago, describes a personalized therapeutic regimen that, beyond sound nutrition and lots of aerobic exercise, also focuses on good sleep hygiene. To maximize sleep’s restorative power, Bredesen recommends fasting for at least ten hours after dinner. That rules out evening bowls of cereal or midnight snacks.
Over the past few years, Bredesen has been striving to bring his work to a wider audience. In a UCLA press release two years ago, Mark Wheeler laid out encouraging anecdotal evidence that Bredesen’s approach could reverse deterioration if treated in a timely manner: “Patient 1 had two years of progressive memory decline. She was considering quitting her job, which involved analyzing data and writing reports, she got disoriented driving, and she mixed up the names of her pets.” A second person was forgetting people’s faces along with the combination for his gym locker. A third person’s memory “was so bad that she used an iPad to record everything, then forgot her password. Her children noticed she commonly lost her train of thought in mid-sentence, and often asked them if they had carried out the tasks that she had mistakenly thought she had asked them to do.”
The abstract of the study notes that all but one of the ten subjects showed cognitive improvement during the trial, and that person was already at a later stage of the disease, too late for the approach to help. Most strikingly, six of the ten patients improved enough during the drug trial to return to work. Improvement, either subjective or objective, was noted. The study gives hope that something as simple as tweaking one’s diet and exercise regimen, along with good sleep hygiene and lots of mentally stimulating activities, can forestall cognitive decline. 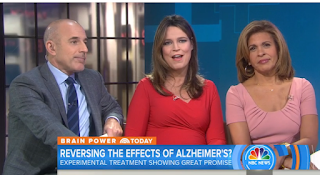