In praise of cemeteries

A quarter-century ago, a German friend of mine introduced me to this epigraph from the Romantic-era poet Heinrich Heine, which can be translated as “Under every gravestone lies a history of a world.” I was twenty-nine, and, for the first time, dwelling on my mortality. I had arrived in the port city of Hamburg at the end of the summer. At a latitude equivalent to northern British Columbia, darkness and dankness settled over northern Germany by the beginning of November, also known as Der Todesmonat—the month of death.
My then-girlfriend Paula, now my wife, joined me in Hamburg in January, but that was still two months away. Having grown up in the Northwest, I was no stranger to gloomy, rainy autumns. Compounding my misery was that I was burning the candle at both ends. In the mornings I taught English to factory workers before they started their shift; in the evenings, in a different part of the city, I instructed well-dressed businesspeople. I also taught at a school that enabled me to tap into Germany’s generous and inexpensive health insurance, despite not being a full-time employee. Much of the time when I wasn’t teaching, I was listless and lonely.
I think of that dreary autumn as the time when I became fully adult. It was when I first fully appreciated that life is fleeting, even for those who live into their seventies or beyond. It also was when I began to appreciate the presence of cemeteries.
That this realization struck me in Germany is no coincidence.  My failure to find a publisher for the novel in which I had poured an enormous amount of energy had left me listless and uncertain about what to do next. Those long months in Hamburg, usually alone, sharply altered my perspective. I recalled a short essay by Freud in which the founder of psychoanalysis counseled a young poet.
“He was disturbed,” Freud wrote, “by the thought that all this beauty was fated to extinction, that it would vanish when winter came, like all human beauty and all the beauty and splendour that men have created or may create.”
Not surprisingly, my mood improved as soon as Paula arrived. We have always enjoyed going for walks, and Hamburg, with its many parks and cemeteries, was excellent for strolling.
In the decades since, I have come to cherish cemeteries.
My chief reason for this is the most obvious: Cemeteries are peaceful places, largely free not just of noise but advertising, the irritating background in the early twenty-first century. In German-speaking lands, people are buried in a Friedhof, a term that translates literally to “peaceful yard.” In my hometown in the Pacific Northwest, my dad lies buried under a tombstone with the chiseled image of his purse-seiner fishing vessel. The life span of that boat (built during World War I, scrapped in the early years of this century) was almost exactly the life span of my father himself. The marker also makes clear that this grave is not yet at full capacity. My mom remains vibrantly alive. 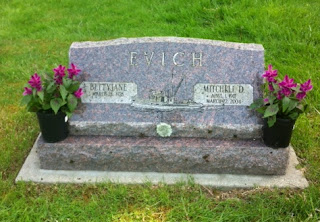 In our country, peacefulness seems an underappreciated virtue. Occasionally, Paula and I will go for walks in Mount Auburn Cemetery, which straddles Cambridge and neighboring Watertown. The site was established in 1831 as the nation’s first “garden” cemetery, with extensive walking paths and many old-growth trees. The surrounding area bustles with cars and buses, and all their noises and odors. To enter the cemetery gates is to visit the nineteenth century.
As Heine suggested, cemeteries invite us to imagine a bygone world, one that is made manifest by arching monuments as well as homely, low-lying grave markers. Who, for example, was Robert C. Winthrop, interred along with his loved ones in the family crypt—a descendent of John Winthrop, the most prominent founder of the Massachusetts Bay Colony? Etched into the stone is the news that this Winthrop was “Eminent as an orator a statesman a philanthropist above all a Christian.”
Elsewhere, in a single view, a visitor can take in an array of shapes: an obelisk, an abstract crucifix partly hidden by a beige rectangular monument with a pyramid on top, and two almost identical rounded tombstones. And what does a group of pale, missile-shaped memorials imply? Souls poised for take off, pointing toward heaven?
My only regret about this cemetery is that the burial plots, like so many other things in Cambridge, are way beyond our price range. 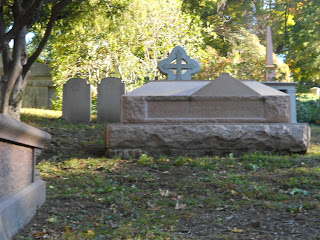 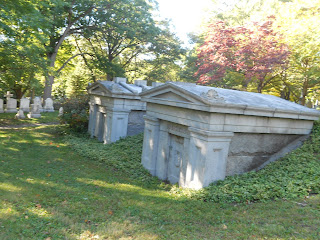 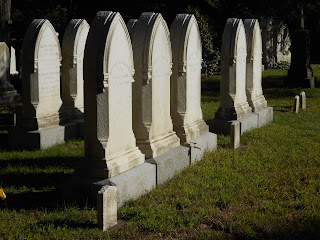