Last month I referred briefly to the 1981 movie On Golden Pond, which I became acquainted with when I was a sophomore in college. Many people remember the film because it was a rare instance of family members being chosen or nominated for Oscars or Golden Globes in the same movie.
But in 1981 not many critics picked up on a key subtext: Norman, played by Henry Fonda, was suffering from dementia. Among the reviewers who whiffed on this theme included two of the leading film critics of their era: Roger Ebert and the New Yorker’s Pauline Kael. Another prominent critic, the New York Times’ Vincent Canby, got closer to the truth, highlighting Fonda’s character’s “physical and mental decline.”
As I watched the movie recently, the signs were startlingly clear. After Norman enters his cabin, he looks disconcertingly in a mirror, as if he doesn’t recognize himself. When he pushes the door to go onto his deck, the door collapses. He stares at a family photo and asks himself, “Who the hell is in this picture?” Then he tries to use the phone. The operator asks him for his phone number, but he can’t recall it. When he goes to the pond’s marina (he purports to be looking for a job), he chews out a couple of teenagers who work there. For an instant, he has his fists up, and when he departs, the two kids smirk. Later, Norman insults his nice-as-could-be mailman by suggesting that it was he, not Norman, who knocked down the door to the deck.
The scene that follows is the one that I recalled soon after my diagnosis. Norman’s wife (Katherine Hepburn) suggests that Norman go out to gather berries in the family’s woods. Visitors, including Norman’s daughter Chelsea (Jane Fonda), are soon to arrive. It appears that Norman is close to the cabin, and sunlight streams through the leafy trees. But he seems to experience a mixture of panic and despair. And this is not something that Norman can easily shake off. When he finally finds his way back to the cabin, his expression is haggard. “You want to know why I came back so fast?” he says, agitated. “I got to the end of our land, I couldn’t remember where the old town road was…. There was nothing familiar, not one damn tree. I came back to see your pretty face.” Yet, remaining in character, when Norman welcomes home his daughter, he refers to her as “my little fat girl.” 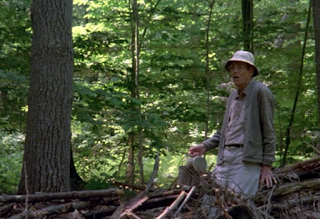 One reason why critics may have overlooked the dementia theme was that, in the second half of the movie, Norman is much more engaged than he was at the movie’s start. But this, too, is plausible. When Norman’s daughter, son-in-law, and thirteen-year-old grandchild arrive, Norman, after an initial awkward period, benefits from the social stimulation, particularly through his bonding with the grandchild. I also wonder if the studio might have worried about showcasing a disease that in the early eighties was still rarely talked about.
I’m not the first person to comment on the lack of references to Alzheimer’s, subtle or obvious, in On Golden Pond. About five years ago, Shelley Webb, writing on her blog The Intentional Caregiver, titled one of her posts “On Golden Pond: A Lesson in Dementia Care.” Dementia, Webb noted, “was often thought of as a part of aging and referred to senility, as something that was expected of old people. Seldom was the fear that the person with the memory loss experienced spoken of.” In this regard, we still have a way to go.
Posted by Mitch Evich at 6:31 AM