What to look for

My mother, a retired schoolteacher, is an accomplished watercolorist, and I recall her not-all-that successful attempts a half-century ago to instill in my brother Matt and me a love of painting. When we were quite young, she drove us to the north side of our city, near where the fishing boats were moored, and when I came home I painted a rust-colored box car. Some years later, in elementary school, I executed a passable football player. But whatever enthusiasm I had for drawing and painting soon was eclipsed by my obsession with sports. It wasn’t until my senior year in college, when I spent the autumn term in Cologne, Germany, that I discovered art.
At twenty-two, I was not a discriminating viewer. It was the sheer oldness of the things that attracted me. One weekend, near the end of my term, I took a night train to Paris, and my initial destination was the Louvre, the superstore of art museums. It was as if I were a contestant in the late-sixties TV show Supermarket Sweep—the ostensible goal being not 16-pound frozen turkeys but to visually consume as many masterpieces as time allowed. And it was here that I encountered the Mona Lisa, smiling thinly through her bulletproof glass. Seven years later Paula and I shared an apartment in Hamburg, close to one of the city’s many canals, for the better part of a year. In just about every city we visited—Berlin, Amsterdam, Heidelberg, Strasbourg—we went to a museum or art gallery.
Last September, thanks to the generosity of a friend, I returned to central Europe, almost certainly my last trip beyond North America. While my friend and I were in Berlin, I visited the city’s museum devoted to Salvador Dali, the Spanish surrealist best known for his melting timepieces and other jarring images. The work that most drew my attention was an ink-on-paper drawing depicting Jesus on the cross being buffeted by a storm of nails, as if his crucifixion was being carried out by hand grenade.
Despite Dali’s reputation as a whimsical genius, and his many paintings of voluptuous nudes, he also inherited from his Catholic mother an appreciation for Christian iconography. One of Dali’s most admired paintings is Christ of Saint John of the Cross. The perspective of the painting looks down on the saint’s long muscular arms and shoulders. At the bottom of this steeply vertical painting, Jesus’s disciples are casting their nets on the Sea of Galilee. According to a website devoted to Dali [dalipaintings.net], the painting was inspired by a sixteenth-century drawing, preserved in the Convent of the Incarnation in Avila, Spain. Keep in mind that this is an artist who titled another one of his paintings The Great Masturbator. Dali’s imagination encompassed multitudes. 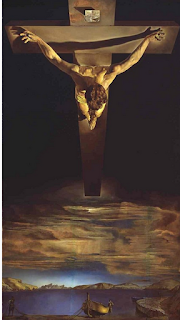 Last Friday, Paula and I, along with several other people who have Alzheimer’s or a loved one who does, visited the Boston Museum of Fine Arts’ exhibit “Making Modern.” The tour was organized by the local chapter of the Alzheimer’s Association, which regularly organizes trips to cultural institutions as well as arranging outdoor activities. After breaking into groups, we were provided a guided tour of modernist painters, starting with Pablo Picasso and Jackson Pollock. We spent a good deal of time discussing vaguely similar paintings from the two masters. As our docent pointed out, there are tonal similarities among the two painters. Pollock, the most famous of the abstract expressionists, was the first painter to splatter paint onto a canvas, rather than painting with a brush. In the ensuing discussion, we were asked to find commonalities between one of Pollock’s works and Picasso’s. One thing we came up with was the use of similar pale-greenish earth tones.
The “Making Modern” exhibit also includes paintings by such well-known artists as Georgia O’Keefe, who did much of her painting in the arid southwest, as well as the great Mexican painter Frida Kahlo. Lesser known to me was Arthur Dove, now regarded as America’s first abstract painter. But as our docent pointed out, his influence has been broad. The docent also introduced us to a new piece in the MFA’s collection by local African American artist Lois Mailou Jones, a work that is half collage and half painting, portraying the famous African American dancer Josephine Baker. We ended with a viewing of Kahlo’s double portrait, which was the first painting she ever sold. Holding a party to celebrate the painting’s sale, Kahlo asked her friends to sign the back of the canvas, and their signatures can still be seen, very faintly, today, thanks to the museum’s display of both sides of the painting.
Posted by Mitch Evich at 6:30 AM