About eighteen months ago, on a flight from Boston to Seattle, I left a cherished leather jacket behind as I was going through security. When we were preparing to land, I wasn’t concerned that I didn’t have the jacket in my lap; I assumed that I had stuffed it into the overhead bin before take-off. I had taken a very early flight, as was my preference, to maximize my time on the ground that first day in the Northwest. By the time I was leaving the plane, I was anxious, and the airport authorities were not particularly helpful. It seems that the jurisdiction for lost items between the airline and the baggage handlers was murky, and a visit to the lost-and-found turned up nothing, and for good reason: I am now almost certain that I lost that jacket going through security back in Boston.
And that was just the beginning. One day during that trip, I took my mom, who lives in an assisted-care facility just north of Seattle, on a drive up into the foothills of the Cascade mountains to the strangely named town of Index for lunch. The restaurant exuded rustic charm, and I tipped the waitress more than I usually do. She certainly earned it. After I helped my mom into our rental car, and I’d started the motor, and was just about to put the car into reverse, the waitress rushed out with my mom’s purse. Had we pulled out just 15 seconds later, we wouldn’t have learned of the missing purse until we arrived back at the assisted-care home, requiring a second two-hour round trip to retrieve the purse that my mom hadn’t needed in the first place: I was the one with the money.
Later on that trip, on a visit to a retired professor of mine and his wife who live on a gorgeous and remote estate east of Interstate 5, I left behind my baseball cap, which I was relying on to protect my baldness from the sun’s ultraviolet rays. For the second straight day, I bounced along a former logging trail for the roughly mile-and-one-half that led to my professor’s home.
Clearly, by this time, in the spring of 2015, I was experiencing symptoms of Alzheimer’s, though I wasn’t willing to believe it. The return trip to Boston was difficult. In some previous years, my brother Matt had driven me to the Seattle airport, but in this case Matt wasn’t available. I had two choices, neither of which were ideal. To guarantee that I would get to Sea-Tac in time, I would have to catch the 2:50 a.m. shuttle from Burlington, one city over from Mount Vernon, where my brother lives. Instead I chose the 4:50 bus, and I failed to fully account for Seattle-area rush-hour traffic, much worse than when I first started driving in the the Seattle area in the late seventies. Still, I was confident that I would catch my flight. And I almost did. There were just two people ahead of me when I learned that no one else would be allowed to board.
The next available direct flight to Boston was that evening. What did I do with myself for the twelve hours ahead of me? I boarded one of Seattle’s gliding commuter trains, which saved me from a vast expanse of boredom at the airport. I spent a couple of hours in Seattle’s futurist library, an architectural marvel. I walked along the waterfront, with its controversial ferris wheel. I had lunch at Pike Place Market, where I gorged down an oyster sandwich, and hung out for a while in Pioneer Square, where someone was strumming a guitar. Then I rode the commuter train back to the airport with plenty of time to spare before my overnight flight to Boston. Everyone had to deplane after a half-hearted bomb threat. Most amazingly, I actually fell asleep on a plane for at least three hours without the luxury of space to stretch out over empty seats. I arrived at my home feeling oddly refreshed, despite my lack of sleep. About two months later I learned I had Alzheimer’s.
The good news: In this year’s trip, I left nothing behind. 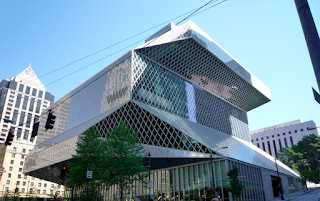