Unlike Walden Pond, where Henry David Thoreau lived for more than two years, Lake Padden isn’t famous. Most people outside of northwest Washington are unaware of it, and that is for the better. As a child and a teenager, I spent more time at Lake Whatcom, the deep, cold, ten-mile-long body of water where I shivered through fruitless swimming lessons and, more than a decade later, learned to water ski. On Lake Padden, motorboats are not allowed. In high school, my friends and I would float on the lake in inner tubes, sometimes with a six-pack attached a few feet below the surface, keeping the beer exceedingly cold. In August, as the football season approached, I would often run two laps around the lake, a distance of just over five miles.
It wasn’t until my junior year in college that I fully appreciated Lake Padden. I’d been having a rough time on our college newspaper, which I’d worked on since the spring of my freshman year. No one questioned my competence as a reporter or an editor, but I was an aloof manager, assuming that the people I was supervising would work as hard as I would. In the fall quarter, when I was a junior, the editor of the newspaper was diagnosed with mononucleosis, and I temporarily filled his place. I thought I was leading by example, but what I was really doing was alienating the majority of my staff. One evening I walked into the newsroom, and I sensed that people had been gossiping about me. The chatter stopped as soon as I appeared.
On the day before the new editor would be chosen, I walked around Lake Padden. It was in early March, a damp part of the year. No one else could be seen. The oxygen I was drawing in acted like a sedative. In the solitude of the muddy trail, I realized, for the first time, that I might not be appointed editor. I had no idea of how to respond. It didn’t occur to me that I should have called a staff meeting, with the aim to clear the air. College is a place where, to one extent or another, most students are not fully mature. I certainly wasn’t, and it showed. But the walk around the lake enabled me to perceive the truth: There was a good chance that I would not be chosen as the next editor—a truth confirmed the following evening.
Nowadays, a walk around Lake Padden’s mild terrain is an essential part of my annual visit to my home town. Walking with me last month were my son Andryc and my cousin Jackie. During the week-plus that we spent in the area, there was only one day with any rain, and I would have felt cheated by drought if we missed out on what the author Timothy Egan coined “the good rain”: the mossy cedars, the stately Douglas firs, the lush carpet of needles on the forest floor. Other than the occasional plop of horse poop, this is the most peaceful place I know. 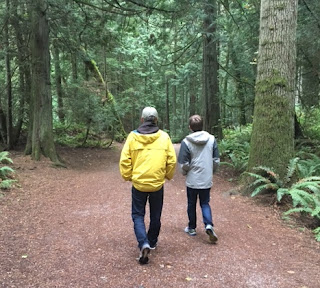