Is it possible to simulate the symptoms of late-stage Alzheimer’s, so people without the disease can experience the condition vicariously? That was the question of a television journalist whose father had died from Alzheimer’s. The journalist, Monica Robins, moved to the Cleveland area in the late 1990s so she could care for her father. After he died, Robins arranged to go through the “Virtual Dementia Tour Comprehensive Program,” created by the company Second Wind Dreams, in order to get a better understanding of what her dad went through.
One of the first steps in the simulation involved putting inserts in Robins’ shoes, intended to simulate neuropathy—the sensation of pins and needles. She then was told to put on a half dozen pairs of socks, to create, presumably, the difficulty of walking after suffering nerve damage in the feet. “What?” Robins exclaimed, when she heard the directive. Another simulation involved compromised peripheral vision, which makes driving a car hazardous. Deeply confused by this time, Robins asked, plaintively, “What am I supposed to do?” Soon she had to attend to another task. A moment later she returned, musing “about a belt,” but failed to understand the context. Another task was to read five instructions posted on a wall. By that time, Robins was bewildered, and could remember only one of the directives.
“Wait! Wait!” she suddenly said. “Something about a picture.…Was I supposed to do something at the table? I don’t know what to do,” she said, her voice brimming with anxiety. She attempted to make the bed, as directed, but because of the hindrances to her vision, hearing and spatial awareness, Robins became ever more disoriented, leading her to break down in tears. “24/7,” she said, a few moments later. “I would honestly change everything that I did,” Robins said, referring to the years that she was caring for her dad. “I don’t want others to make the mistakes that I did.”
Robins, however, may have been too hard on herself. After all, it was her father she was caring for, not some stranger. How not to feel some inadequacy, if for nothing more than the lack of being able to do the impossible? And I, too, occasionally ponder what late-stage Alzheimer’s might be like. I recall reading that Ralph Waldo Emerson, one of the great minds of the nineteenth century, seemed relatively serene in his final years, despite his dementia, which manifested itself as aphasia (the loss of language, an especially cruel fate for someone who was exceedingly articulate). Still, the Sage of Concord is said to have maintained his equanimity. “I have lost my mental faculties but am perfectly well,” Emerson purportedly said.
To view video of Robins’ challenges, do a search for “Virtual dementia reveals what life is like with brain disorder.” 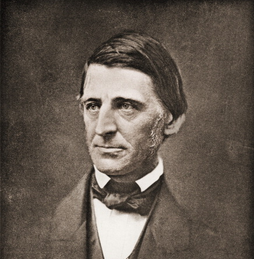 With the holidays approaching, my next blogpost will appear on Friday, December 30.
Posted by Mitch Evich at 5:36 AM