When I worked on my college newspaper in the early eighties, some of us typed our articles on rolls of brown paper, otherwise used for the drying of hands. One reporter, of limited stature, typed stories as long as he was. Though I owned an electric typewriter, in the newsroom, like everyone else, I pounded out my stories on battleship-gray manual Royal typewriters, well-known for their durability. Columnist Herb Caen, a fixture at the San Francisco Chronicle for almost sixty years, is said to have used the same Royal for his entire career. In our newsroom, a friend who also played on the football team amazed our colleagues by carrying one of the tank-like Royals across the room in one hand. 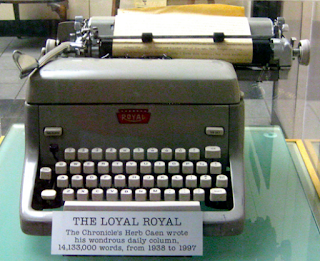 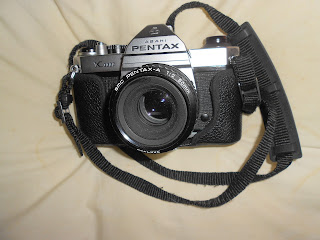 When I graduated, my mom bought me a Pentax K2000 camera, which, like the Royal typewriter, had a reputation for durability. As a young reporter on a newspaper in Connecticut, I was required to take my own photos. I also learned that it was possible to drop my K2000 and not seriously damage it.
One thing I appreciate about that camera is that I more or less understand how it works. The camera lets in the appropriate amount of light to enable the creation of a durable image on specially treated film.
Somewhere in my attic is a large black-and-white print of me when I was ten years old, decked out in my Little League uniform and catcher’s gear: face mask, chest protector, shin guards. In the photo I’m preparing to catch a simulated pop fly. But anyone with  knowledge of baseball would notice that something is askew: The photo implies that I’m wearing a catcher’s mitt on my right hand. All catchers, even in Little League, are right-handed, and wear their mitt on their left hand.
This photo was not professionally developed. Friends of my brother, who was fourteen, set up a darkroom in their house. The kids who developed the photo did it backwards.
My Pentax camera was fairly easy to use, but nowhere near as simple as today’s digital cameras and smartphones. The film cassette fitted over a vertical spindle on the left side of the camera, and the roll of film began with a tapered leader that ensured that the film would advance. Film did not advance automatically. You had to push with your thumb a lever on the right of the camera. It was important to pay attention to the light meter. If the needle rose significantly above the midpoint of my gauge, the pictures would look washed out; if the needle was too low, the photos would come out dark. Auto focus was not an option. A separate dial on the camera’s detachable lens was used to bring the image into focus. For taking photos indoors, it was necessary to slide in the flash unit above the camera.
The camera, now thirty-one years old, still works, though the flash unit died many years ago from acid leaching out of a dead battery.
Today, of course, digital technology is everywhere – in the music we listen to, in most of the movies we see, and, of course, in the zillions of photos on Facebook.
Which raises a question: Does the glut of digital information make us more informed? Or less so? Could we perhaps have a few less cat photos and videos?
Disclosure: I posted photos of one of my cats earlier this week. He was roaring after waking and discovering that there was multicolored yarn on his head. Sometimes I give in to the spirit of our age.