If you have never heard of B. Smith, here is a brief sketch: She grew up in Scottdale, Pennsylvania, in coal country, about 45 miles south of Pittsburgh. Her father was a steelworker and her mother worked as a maid. Out of these humble origins, she became the first African-American model to appear on the cover of Mademoiselle. In the following decade, the eighties, she opened the first of her acclaimed B. Smith restaurants, in Manhattan. In the early 2000s, her keen taste in home décor led to her being described as “the black Martha Stewart,” through her television program, B. Smith With Style.
Around September 2013—the same time I was experiencing my first pronounced symptoms of Alzheimer’s—B. Smith was diagnosed. B., her husband and manager Dan Gasby, and the professional writer Michael Shnayerson collaborated on likely the most insightful and comprehensive book yet published about Alzheimer’s: Before I Forget: Love, Hope, Help, and Acceptance in Our Fight Against Alzheimer’s. The book cover alone speaks volumes. B. (short for Barbara) and Dan are dressed fashionably in black. But this is no celebratory power-couple portrait. You can see the sadness in Dan’s eyes, as B., her eyes closed, nuzzles her face against Dan’s collarbone. The book opens with the first of several passages in which B. speaks for herself:
“I know where I’m going. I’m still myself, I just can’t remember things as well as I once did. So on short trips, I work hard not to be confused. I’ll say to myself, ‘Where are we going to? How long are we staying?’ It’s like I’m talking to my other self—the self I used to be. She tells me, ‘This is what we need to buy—not that.’ I’m conscious of that other self guiding me now.”
B. goes on to describe how Dan often gets frustrated with her, and she with him. Particularly disturbing to Dan is that B., despite her previously exquisite sense of taste, has begun to hoard things. A recurring motif is Dan’s frustration with the sheer weight of B.’s purse, jammed with many objects for which she has no use. B. concludes this monologue by expressing her desire to visit her parents in Pennsylvania. Then she remembers that her parents are dead. She does not know what year it is.
An ominous warning came in early 2013, when Dan and B. were the co-hosts of a SiriusXM talk-radio program. B. was in her early sixties. As Dan noted, silence on the radio is deadly. When B. asked a question, the guest replied, but B. failed to return the volley. She seemed to blank out for a moment.
This book, however, is far more than an account of someone enduring an incurable disease. Each chapter is followed by a useful “Lessons Learned” section. One lesson soon became obvious: B. was in no shape to drive. Previously, she had made absent-minded mistakes, such as failing to replace the removable roof on one of their vehicles. It rained that night, and the interior got soaked. More significant, for sentimental reasons, was B.’s leaving Dan’s wallet on top of one of their cars. The wallet contained a medal that a friend entrusted to Dan; the friend had had his hand blown off in Afghanistan. Despite an exhaustive search on a short stretch of road near their summer home on Long Island, the medal was never found.
In a very dangerous episode, B., angered by something Dan had said or done, commandeered the couple’s Mercedes G-Wagon. Dan was astonished. He saw B. fly past at high speed. Police were summoned, and it made the nightly news. B. ended up abandoning the vehicle and walking an astonishing number of miles—in pumps—from where she’d abandoned the car in lower Manhattan.
This book—which also includes an authoritative section on Alzheimer’s research—is especially good in describing the frustrations of the disease, for caregivers and  people living with Alzheimer’s alike. My cohorts in our early-stage Alzheimer’s support group tend to have subtle symptoms, such as losing one’s train of thought (a problem of mine) or having trouble dredging up specific words. Sadly, B. inhabits a much more circumscribed realm.
The heartbreak for B., Dan, and Dan’s adult daughter is that the disease appears to be moving quite swiftly. The deterioration of her faculties must be heartbreaking for her loved ones. Research indicates that African Americans and Hispanics are more susceptible to the disease than the population at large, and Before I Forget devotes an entire chapter to Alzheimer’s and African-Americans. I admire Charles Ogletree, the renowned African-American Harvard law professor who recently announced that he has the disease. And I am confident that Professor Ogletree will bring a powerful voice to the discussion about Alzheimer’s. There remains much work to do to demystify this often-misunderstood condition. 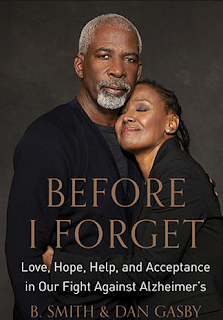