My family and I, plus our daughter’s friend, spent the better part of last week in Chatham, on Cape Cod. We were less than a ten-minute walk to a beach on Nantucket Sound, and we made the walk several times. On one of the days my son and I did a lengthy bike ride. But I will remember this trip more for what I didn’t do. I didn’t join the rest of my family on a trip to Chatham’s commercial district. My intent was to spend an hour or so reading on the cabin’s deck, near the shade of a scrub pine and a scrub oak, the oak garlanded with moss and festooned with lichen.
At regular intervals, I would set my book aside and gaze into the oak’s canopy. There was a brisk breeze. When I tilted my head back, the clouds seemed to be rushing by on a conveyor belt. I heard the wind sough. The sun was glaring. It reminded me of a movie from the early nineties, in which River Phoenix played a character who experienced intense narcoleptic dreams. When I went back to my book, I felt something strike me on the crown of my baseball cap. It was a brown cigar-shaped seed from the scrub pine, about an inch long. Was I being taught a lesson? Stay attentive, don’t bury one’s nose in one’s book? 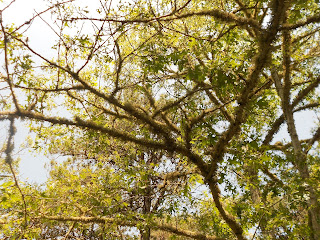 A couple of weeks after my diagnosis last June, I was out for a walk when I came across a snail on the sidewalk. The rain had been heavy earlier that morning, and I had chosen to wear my Italian hiking boots that my mom bought for me just before I left for a term abroad in West Germany in 1983. Thirty-two years later the original thick red boot laces remained intact, despite being exposed to hundreds of feet of snow in the years since. I’d been walking vigorously, for exercise, when I saw the snail, and was careful, plodding human that I am, not to crush the life out of this proverbially patient creature.
How long would it take that snail to cross a single square of sidewalk? Minutes, hours, days, months, years, decades, centuries? How many eons for evolution t0 produce this exquisite whorl? When did the lowly, unctuous slug first take up residence in a tawny palace? 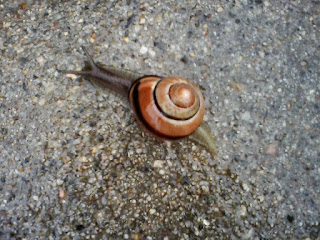