If you can stomach it

With the exception of mussels, which make me violently ill, I can eat pretty much whatever I want and not gain weight. This, I concede, is a nice problem to have. But there have been times—especially in the months leading up to my being diagnosed with Alzheimer’s—during which I’ve been disconcertingly thin. Thanks to a trip to Berlin and Prague last September, I embraced the Central European Diet, consisting primarily of sausages and sauerkraut washed down by the best Pilsners on earth. I gained back five pounds, getting me back to 140 pounds, more or less my typical weight in middle age.
Once I regained those pounds, I started choosing carefully what I would be eating. I’m no vegetarian. Paula and I eat fish or chicken at least once a week. But I have pretty much abandoned red meat. My standard breakfast consists of a double-serving of five-minute oatmeal. About once a week I soak a half-cup of steel-cut oatmeal overnight, and then simmer it for ten minutes in the morning. I add a half-cup of plain yogurt for the protein and calcium, along with a mashed-up half-banana and raisins or dried cranberries, and the contents of a single walnut.
Walnuts also feature in my typical lunch: I read somewhere that five walnuts a day may help forestall Alzheimer’s. These kind of claims are best consumed with a healthy sprinkling of skepticism, but, if you like walnuts, there’s really no downside. Now that it’s summer, I’ve been eating a lot of steamed spinach, and earlier this week Paula prepared a terrific kale salad. I’ve also resumed eating broccoli, either raw, steamed, or boiled. I also consume a lot of chickpeas, either in the form of hummus or in a simple chickpea salad. Organic carrots have been a staple in our kitchen for years, and I almost always eat them raw.
I also consume a lot of fruit—huge quantities of Bing cherries from Eastern Washington this time of year. Unfortunately, according to Jay Ingram, author of The End of Memory: A Natural History of Aging and Alzheimer’s, Bing cherries and other fruits seem to lack some quality that most vegetables have: the ability, to some modest extent, to delay the disease’s progress.
Over the last week or two, my lunch has often included tins of sardines or herrings, each of which are rich in omega 3 fatty acids, an element  said to be good for the brain. Herring has the aesthetic edge in that it is less fishy-tasting and, more important, less fishy-smelling. To further blunt the taste, I serve the herrings or sardines on a bed of wilted spinach, and then top the fish with slender rings of raw onions. I finish off the entrée with a simple dressing of olive oil, balsamic vinegar, and ground pepper. It’s good. Believe me. Paula prefers that I eat it out on our deck, and she has developed a strict protocol for disposing of the can’s smelly residue. The procedure is too complicated to describe here, but it appears likely to win approval from the Food and Drug Administration. Already OK’d are my canned salmon-and-onion sandwiches, served between two slices of multigrain bread.
One thing worth underscoring: It would be hard to devote so much time to my diet if I were still employed. Following the slow-food movement requires leisure time, and for the first time in decades, time is a robust commodity of mine. 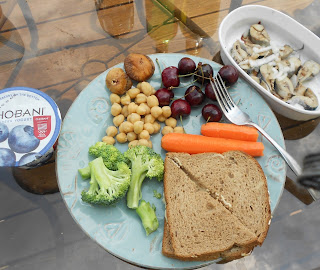